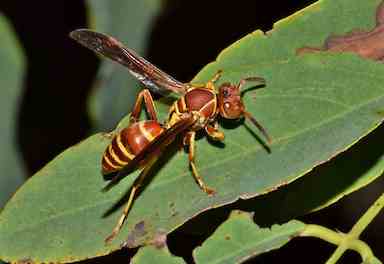 Wasps are a diverse group of insects. In Australia alone there are over 12,000 species, ranging from the tiny diapriid wasps, which are barely visible to the naked eye, to the spider and cicada-killer wasps, capable of taking large prey. Most wasps have carnivorous larvae that feed on other insects and spiders. The adults provide food for them by capturing prey or by laying the egg on or near the food source, which might be an egg, larva or pupa of another insect.

Depending on the species, wasps range between less than ½ an inch to more than 1 ½ inches in length. Wasps have both hind and front wings, with the hind wings being noticeably smaller than the front ones. Additionally, a wasp's antennae are shorter than its body and have no noticeable scales on its surface. The European Wasp is easily identified by its lemon-yellow banding against a black body. In addition, the wasp does not look hairy.

The Damage wasps can cause

The type of destruction that wasps cause is generally linked to their nesting habits or the hosts used for their larvae. Paper wasps will build their nests hanging from any protected surface such as a tree or porch. When these nests are in close proximity to a home, it is possible for them to be disturbed and people nearby to be stung. Although causing minimal destruction, the spider wasp does have a very painful sting making it a danger for people.

Depending on the species, a wasp will either build a nest for its eggs or seek a host. Most species of wasps are solitary, laying their eggs, providing a food source for the larvae, and leaving without return.

In terms of nest builders, the mason wasp will create one nest for one egg, filling it with paralysed caterpillars or beetle larvae before sealing the nest.

Also a nest builder, the paper wasps are semi-social insects. These wasps exist in small colonies with queens and males. The founding queen will generally be the only one to lay eggs, but the others will retain their reproductive abilities and replace the founding queen, should it die.

Wasps whose larvae are housed in hosts include the digger and the spider ants. These wasps first sting the host to paralyse it and then attach their eggs, building a protective layer of cells around both the eggs and the host. The larvae will then feed on the paralysed host until reaching adulthood.

The wood wasp lays eggs in batches of 1-7 after inserting its ovipositor into wood. The wasp also inserts a fungus which grows quickly in the wood and provides a food source for the larvae as they burrow. A single wood wasp can lay 300-500 eggs each year, over a 10 day period.